There’s no reason a wood structure can’t last virtually forever – or, at least hundreds of years, far longer than we may actually need the building. With a good understanding of how to protect wood from decay and fire, we can expect today’s wood buildings to be around for as long as we wish.

While wood does not have the historical longevity of stone, there nonetheless remain standing some very old wood buildings. In Europe, wood was long a dominant building material dating back to the beginning of civilisation. Most of these ancient buildings are long gone, lost to fire, decay, or deconstruction for another purpose. In the early days of wood construction, the primary structural components were placed directly in the ground, which eventually leads to decay. It was not until sometime in the 1100s that builders began to use stone footings – thus our still-standing examples of wood buildings generally date from no earlier than that time.

Perhaps the most famous ancient European wood buildings still in evidence today are the Norwegian stave churches, hundreds of which were built in the 12th and 13th centuries and of which 25-30 still remain today. Their exterior claddings have typically been replaced, but the structural wood is original. 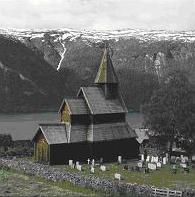 In North America, the abundance of wood and the existing timber skills of early settlers led to widespread use of wood – wood has always been and still is the primary structural material for small buildings here. The oldest surviving wood homes in the US date to the early 1600s. Nearly 80 homes remain from this era in the New England states.

The Fairbanks House (c. 1636) in Dedham, Massachusetts, USA, is the oldest surviving timber frame house in North America. It was built for Jonathan and Grace Fairebanke and was occupied by them and seven succeeding generations of the family until the early twentieth century. The Fairbanks family still owns the property. The house is open as a museum. Photo source.

Many other North American wood buildings survive from the 18th century. Even in the demanding climate of Louisiana, where hot and humid conditions present a challenge for wood durability, one can still find some of the original French settlements dating to the first half of the 1700s. And of course, there are countless standing wood buildings from the 1800s and early 1900s, most of which are probably still occupied.

The Parlange Plantation (c. 1750) in Pointe Coupée Parish, Louisiana, USA, was built by the Marquis Vincent de Ternant and remains in the possession of his descendants, the Parlange family. This large plantation home was constructed of bousilliage (mud, moss and deer hair) and cypress wood set over a hand-made brick raised basement. Photo source.

Japan has a well-known history of wood use and is the home of the oldest surviving wood structure in the world, a Buddhist temple near the ancient capital city of Nara. The Horyu-ji temple is believed to have been built at the beginning of the eighth century (c. 711) and possibly even earlier, as one of the hinoki (Japanese cypress) posts appears to have been felled in the year 594. This temple’s longevity is largely helped by careful maintenance and repair. This entire region of Japan has many other ancient wood buildings still standing. 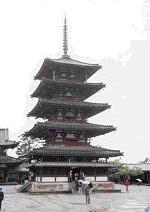 The Horyu-ji temple at Nara

For modern buildings, we don’t normally require such exceptional longevity. The life of a typical North American house is no more than 100 years (the average is lower), and our non-residential buildings are usually demolished in 50 years or less. Wood is perfectly suitable for these lifetime expectations. Click here for survey data showing that wood buildings last as long, or longer than buildings made of other materials.

Reference:
Architecture in Wood: A History of Wood Building and Its Techniques in Europe and North America. Hans Jrgen Hansen, Ed., Faber and Faber, London, 1971.. 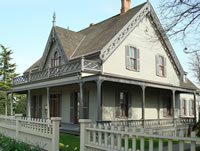 Irving House is a large, one and one-half storey plus basement wood-frame residence, designed in the Gothic Revival style, located on its original site at the corner of Royal Avenue and Merivale Street in the New Westminster neighbourhood of Albert Crescent. Irving House is remarkable for the extent to which its original exterior and interior elements have been maintained. Operated as an historic house museum, it also includes a collection of many original furnishings from the Irving family.

This classic turn-of-the-century home was slated for demolition in 1990. It was already stripped back to the bare framing when it was purchased by a new owner who wished to convert it into apartments. At the new owner’s request, the building was inspected by Dr. Paul Morris of Forintek in 1991 for signs of deterioration. After 80 years in service there were no signs of decay on any of the framing members nor the window frames, most of which were original.

The Horyuji Buddhist temple at Nara is probably the oldest wooden structure in the world. Nara became the first permanent capital of Japan in 710.