In the National Building Code of Canada (NBC) “fire-resistance rating” is defined in part as: “the time in minutes or hours that a material or assembly of materials will withstand the passage of flame and the transmission of heat when exposed to fire under specified conditions of test and performance criteria…”

The fire-resistance rating is the time, in minutes or hours, that a material or assembly of materials will withstand the passage of flame and the transmission of heat when exposed to fire under specified conditions of test and performance criteria, or as determined by extension or interpretation of information derived therefrom as prescribed in the NBC.

The test and acceptance criteria referred to in the NBC are contained in a standard fire test method, CAN/ULC-S101, published by ULC Standards. 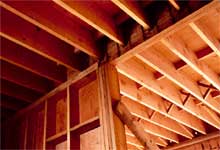 Horizontal assemblies such as floors, ceilings and roofs are tested for fire exposure from the underside only. This is because a fire in the compartment below presents the most severe threat. For this reason, the fire-resistance rating is required from the underside of the assembly only. The fire-resistance rating of the tested assembly will indicate, as part of design limitations, the restraint conditions of the test. When selecting a fire-resistance rating, it is important to ensure that the restraint conditions of the test are the same as the construction in the field. Wood-frame assemblies are normally tested with no end restraint to correspond with normal construction practice. 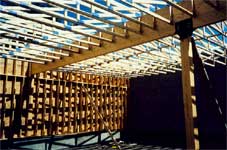 Partitions or interior walls required to have a fire-resistance rating must be rated equally from each side, since a fire could develop on either side of the fire separation. They are normally designed symmetrically. If they are not symmetrical, the fire-resistance rating of the assembly is determined based on testing from the weakest side. For a loadbearing wall, the test requires the maximum load permitted by design standards be superimposed on the assembly. Most wood-stud wall assemblies are tested and listed as loadbearing. This allows them to be used in both loadbearing and non-loadbearing applications.

Listings for loadbearing wood stud walls can be used for non-loadbearing cases since the same studs are used in both applications. Loading during the test is critical as it affects the capacity of the wall assembly to remain in place and serve its purpose in preventing fire spread. The strength loss in studs resulting from elevated temperatures or actual burning of structural elements causes deflection. This deflection affects the capacity of the protective wall membranes (gypsum board) to remain in place and contain the fire. The fire-resistance rating of loadbearing wall assemblies is typically lower than that of a similarly designed non-loadbearing assembly.

The NBC permits the authority having jurisdiction to accept results of fire tests performed according to other standards. Since test methods have changed little over the years, results based on earlier or more recent editions of the CAN/ULC-S101 standard are often comparable. The primary US fire-resistance standard, ASTM E119, is very similar to the CAN/ULC-S101 standard. Both use the same time-temperature curve and the same performance criteria. Fire-resistance ratings developed in accordance with ASTM E119 are usually acceptable to Canadian officials. Whether an authority having jurisdiction accepts the results of tests based on these standards depends primarily on the official’s familiarity with them.

Testing laboratories and manufacturers also publish information on proprietary listings of assemblies which describe the materials used and assembly methods. A multitude of fire-resistance tests have been conducted over the last 70 years by North American laboratories. Results are available as design listings or reports through:

The most practical alternative calculation method includes procedures for calculating the fire-resistance rating of lightweight wood-frame wall, floor and roof assemblies based on generic descriptions of materials. This component additive method (CAM) can be used when it is clear that the fire-resistance rating of an assembly depends strictly on the specification and arrangement of materials for which nationally recognized standards exist. The assemblies must conform to all requirements in NBCC, Division B, Appendix D-2.3. Wood and Steel Framed Walls, Floors and Roofs.

While the information currently contained in Appendix D-2.4. addresses more historic construction techniques, there has been some resurgence in the use of such assemblies, and the information can be particularly useful when repurposing historic buildings.

NBC, Division B, Appendix D also includes empirical equations for calculating the fire-resistance rating of glue-laminated (glulam) timber beams and columns, in Appendix D-2.11. These equations were developed from theoretical predictions and validated by test results. Large wood members have an inherent fire resistance because:

These factors result in unprotected members that can stay in place for a considerable time when exposed to fire. The NBC recognizes this characteristic and allows unprotected wood members, including floor and roof decks, that meet the minimum sizes for heavy timber construction to be used both where a 45-minute fire-resistance rating is required and in many noncombustible buildings. The calculation method in Appendix D determines a fire-resistance rating for glulam beams and columns based on exposure to fire from three or four sides.

The formula for columns or beams which may be exposed on three sides applies only when the unexposed face is the smaller side of a column; no experimental data exists to verify the formula when a larger side is unexposed. If a column is recessed into a wall or a beam into a floor, the full dimensions of the structural member are used in the formula for exposure to fire on three sides. Comparisons of the calculated fire-resistance ratings with experimental results show the calculated values are very often conservative. A designer may determine the factored resistance for a beam or column by referring to CSA O86 Canadian Wood Council’s Wood Design Manual.

As well, the CSA O86 standard includes an informative Annex B that provides a method to calculate fire-resistance ratings for large cross-section wood elements, such as beams and columns of glued-laminated timber, solid-sawn heavy timber and structural composite lumber.